Below is a transcribed version of the original document in HTML format.

AN ORDINANCE OF THE COUNTY OF SACRAMENTO,

AMENDING THE ZONING CODE OF SACRAMENTO

The Board of Supervisors of the County of Sacramento, State of California, does ordain as follows:

Sections 101-136 and 101-143, Chapter 1, Article 4, Title I of the Zoning Code of Sacramento County, Ordinance 83-10, as amended, which incorporates comprehensive zoning plan units 348/188 and 348/200 are amended to change the property described in Exhibit A to include the Neighborhood Area combining zone. Exhibit "A" is attached hereto, incorporated herein, and made a part of this ordninance.

Chapter 34, Article I, Title V, of the Sacramento County Zoning Code is hereby amended to read as follows:

It is the purpose of the Board of Supervisors in adopting this Neighborhood Preservation Area Ordinance to preserve and protect the unique semi-rural residential character of the neighborhood described in Exhibit "A" and to further the purposes of the Carmichael Community Plan.

Exhibit "A", described as property regulated by this Section and adopted by Ordinance, is incorporated herin and made a part of this Article.

Those uses provided for by the underlying land use zones as defined in Section 201-02, Table I of this Code shall be permitted and conditionally permitted in the area described in Exhibit "A".

During the public hearing on this ordinance, the Planning Commission and Board of Supervisors determined that:

(a) The are described in Exhibit "A" is largely developed with single-family residential uses, which include agriculture, rural and open space.

(b) The residential neighborhoods located in the area described in Exhibit "A" are a long standing use in the area and have established boundaries and cohesion typical of such neighborhoods.

(c) It is in the best interest of the residents of the are described in Exhibit "A" and the County of Sacramento that the semi-rural residential character of the existing neighborhoods be preserved, protected and maintained, by restricting development not consistent with the existing zoning designations.

(d) The area described in Exhibit "A" is of adequate size for development of projects pursuant to the terms of this ordinance, and the regulations contained herein will not constitute the granting of a special privilege nor deprivation of property rights.

(e) This ordinance is consistent with the intent of the Carmichael Community Plan goals and objectives for preserving as much of the semi-rural open space as possible.

This ordinance shall take effect and be in full force on and after thirty (30) days from the date of its passage hereof, and, before expiration of fifteen (15) days from the date of its passage, it shall be published once with the names of the members of the Board of Supervisors voting for and against the same, said publication to be made in a newspaper general circulation published within the County of Sacramento.

On a motion by Supervisor Sandra Smoley, seconded by Supervisor Jim Streng, the foregoing ordinance was passed and adopted by the Board of Supervisors of the County of Sacramento, State of California, at a regular meeting thereof this 6th day of April, 1988, by the following vote, to wit: 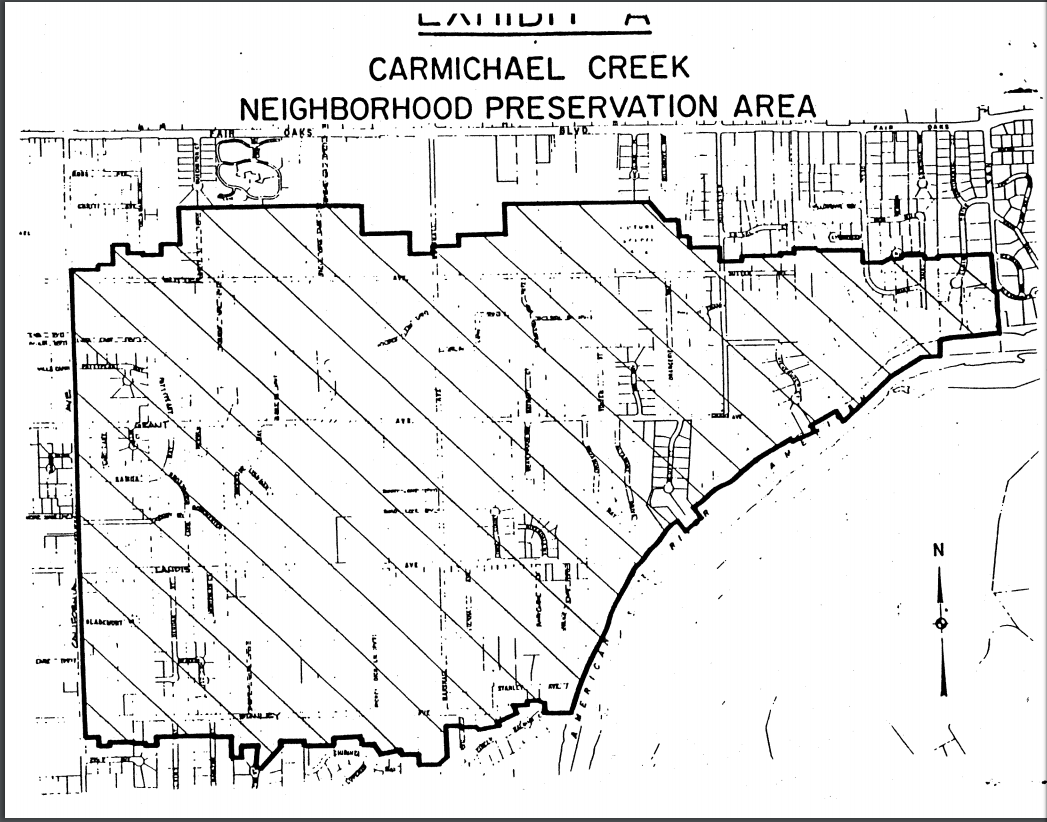