CCNA was saddened to learn that Peggy Berry passed away this year. Peggy was a founding member and first secretary of the CCNA. She was a very caring and active member of the community, and she will truly be missed.

Margaret (Peggy) Berry was born in Kansas City, Missouri, on October 14, 1936. Her mother, Mary, succeeded in getting a rare divorce from Peggy's father and later married John Wagaman. The new family departed for Sacramento, California, in 1950, where Peggy soon enrolled in El Camino High School as a freshman. By her senior year, she was editor of the school newspaper and working as a stenographer. After high school, she spent about a year at Sacramento State University, before heading to San Francisco, where she earned her teaching credential at San Francisco State University.

Peggy taught elementary school in Sacramento for a year and met William Berry, the love of her life, who was studying law at Stanford University. Within a year, she and Bill married and embarked on a life together that would span five decades and three continents. They had four children - Bruce, John, Diane, and Scott - and bought the house that would become the family home on Brookside Way, in Carmichael. Bill secured a job with the recently formed Peace Corps, and the family moved to Ankara, Turkey. Peggy quickly adapted to life overseas, and enjoyed immensely the people, cuisine, history, and culture of Turkey. A couple of years later, Bill got a new assignment as director of the Peace Corps office in Paraguay, so Peggy packed up the family and boarded a Braniff jet for South America. The years in Paraguay were a high point in Peggy's life. She learned Spanish well enough to make friends, negotiate with street vendors, converse with the Paraguayan musicians who performed at Peace Corps parties, and manage all the affairs of the family household.

Back in Carmichael, Peggy and her family settled into their Brooksdie Way home and re-adapted to life in the states. Her passion, dedication, and sense of curiosity took her down a wide range of paths: Parent Teacher Association, 4-H Club, Cub Scouts, Carmichael Creek Neighborhood Association, and of course, California's nature and wildlife. She worked countless hours to protect local flora and fauna, supporting a variety of environmental organizations, from the Effie Yeaw Nature Center to Sacramento Splash to California Native Plant Society. Along the way, she and Bill became deeply involved in the long and ultimately successful struggle to modernize Carmichael's water infrastructure.

Peggy was able to spend her final months in her beloved home, where friends and family could visit her, and where she could enjoy the birds, deer, and oak trees of her backyard. A wonderful team of caregivers made this possible, quickly becoming part of the family. She died a few days short of her 85th birthday, peaceful, surrounded by friends and family who loved her dearly. 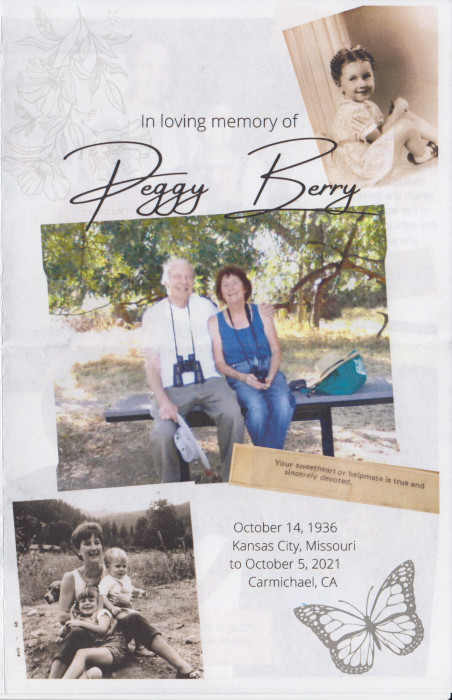 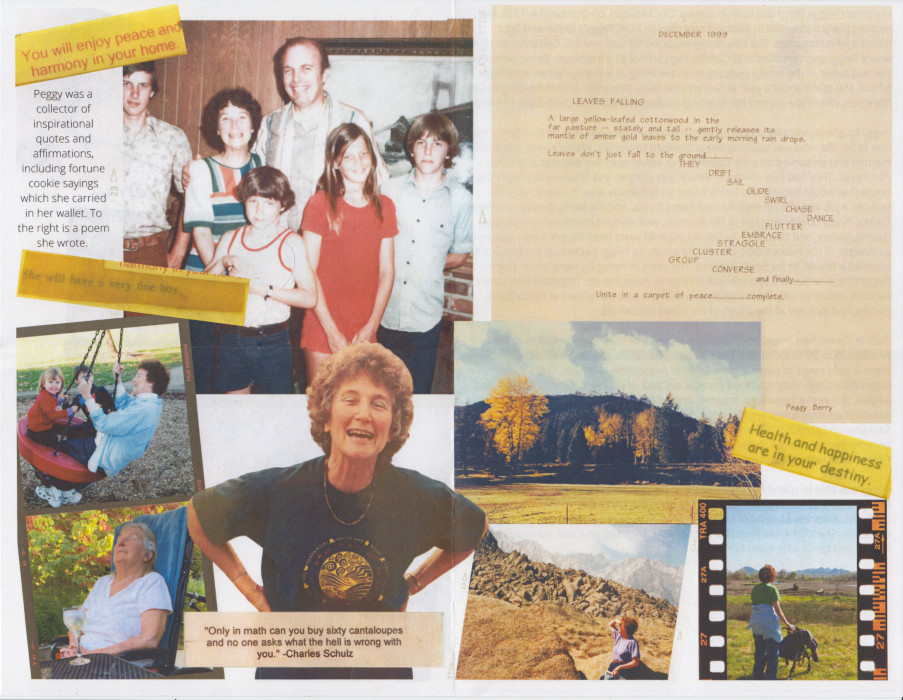 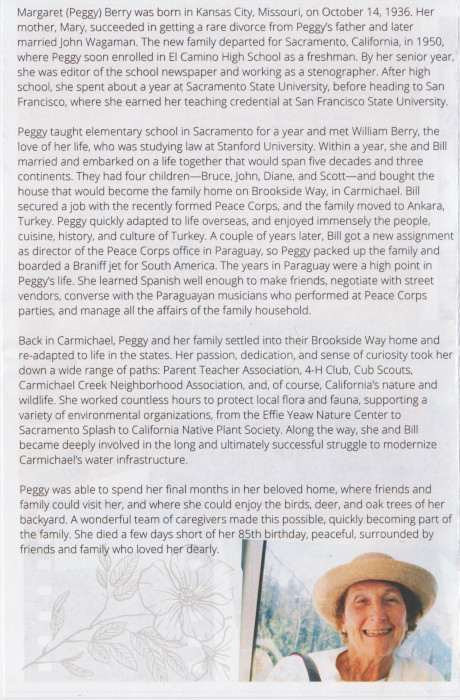 My History with Peggy by: Marilyn Hyatt

My parents purchased my current home in 1971 on 2 1/2 acres (zoned RD-1). In 1981 they then built a 2nd home across from what is now my home. (To have me and my family nearby, watch their grandchildren grow and our assistance as they aged.

When Peggy and the CCNA started, my mother (who was a retired Senior Title Searcher for the state) would have met Peggy on her rounds through the neighborhood educating locals on CCNA. Mom educated us on Peggy and the CCNA and intent to keep Carmichael open areas and not fill-in with housing developments.

My daughter bought a home also on Brookside. Peggy would always have books for the boys for Halloween with the addendum to come back and read them to her once they mastered them. They will miss that going forward...

My mother's home had to be sold in 2006. The purchaser was adamant she could put more homes on her 1 1/4 acre lot. She didn't know the neighborhood nor understood exactly what RD-1 meant and current zoning laws for this area (thanks to Peggy and the CCNA!). She found out the hard way she couldn't get her way. We then dealt with 15 years of tenants (good and bad). The home just recently sold and everyone that took a look at the property got the lecture on RD-1, how the neighbors stood behind it and again, the CCNA. We are fortunate the buyers had no intentions of splitting and have become wonderful neighbors. They're intent is to build a "food forest" which they are working at daily. It's a joy to seeing it happening.

We recently met K.C., who is also a neighbor and Peggy's niece. I shared with K.C. that Peggy was the Grande Dame of Carmichael in our eyes. Bottom line, If you don't know or were not aware of Peggy Berry - you don't know Carmichael.